First, let’s talk about demandingness.  Demandingness is defined as, “the claims parents make on children to become integrated into the family whole, by their maturity demands, supervision, disciplinary efforts and willingness to confront the child who disobeys” (Baumrind 1991).  Another way to think of demandingness is tough love.  Tough love means holding your children accountable and giving them consequences.  Tough love is teaching and correcting their behavior when needed.  It means discipling the child when called for.  Finally, it means having rules, standards, and expectations for your child.

On the other side of the parenting continuum is responsiveness.  Responsiveness is defined as, “the extent to which parents intentionally foster individuality, self-regulation, and self-assertion by being attuned, supportive, and acquiescent to children’s special needs and demands”  (Baumrind 1991).  Responsiveness involves tuning into your child’s emotional needs.  It means responding with comfort when your child is sad, scared, or hurt.  It is parenting with care, understanding, and grace.  Finally, in attachment theory it is known as creating a safe and secure base. 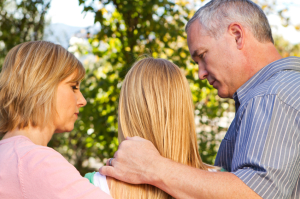 Authortarian parents expect their children to obey without question.  The phrase, “Because I told you so,” is often said by authortarian parents as a way to control children.  There is little to no responsiveness with this parenting style.  It is all about rules, truth, and discipline.  It is at the extreme side of demandingness on the continuum and fear is used as a means of control.  Children of this parenting style may be compliant, but ultimately they have lower confidence and may suffer from depression and anxiety.

The permissive parenting style has the components of being responsive and caring but lack the initiative to set appropriate boundaries with their children.  This style is on the extreme side of responsiveness on the continuum.  Permissive parents become their child’s friend rather than the wise and caring caretaker they need for healthy development.  Children of permissive parents tend to have elevated levels of self-confidence and do not really suffer from depression and anxiety.  However, they tend to have higher levels of problematic behavior (defiance, truancy, drug use) and often do not perform well academically.

It can said that the authoritative parenting style is in the middle of the continuum.  It is balanced between demandingness and responsiveness.  Parents provide a mixture of structure and care.  The child is disciplined with a combination of fairness and love. Parents are not harsh nor are they a push-over.  They are engaged by challenging their children to be their best, while being there for them when they at their worst.  Children of parents who have an authoritative parenting style tend to be well adjusted, perform well academically, confident, emotionally secure, and develop empathy towards others.

The goal in parenting is to find the balance between demandingness and responsiveness.  Walking the parenting balance beam and knowing when to be demanding and when to be responsive is the key to raising well balanced, loving, and successful children. What I learned is that it is possible to be both demanding and responsive all at the same time.  An illustration of this is when my son rode his bike away from me after I told him not to.  When I could not see him I was both angry and afraid.  Once I finally reached him I explained to him how afraid I was not being able to see him and reassured him how of much I care.  I also gave him a consequence for his behavior and set boundaries for future bike rides.

I share this story from my family to share what it looks like to walk the parenting balance beam.  Of course, there are times when just like a gymnast I lean too far on one side and that is when I inevitably fall.  I am either demanding when I really need to be responsive or vise versa.  This is when we need to realize that we do not have to be perfect as parents.  When we fail, not if, we can always model to our children humility and come back with the response they truly need.

If you are a parent or a caretaker of a child or a teen and want to learn more about our family counseling, child counseling, teen counseling, or parenting classes then call one of our Phoenix and Scottsdale Relationship Centers at 623-680-3486 or email info@crossroadsfcc.com.  We would love to help you become more successful in walking the parenting balance beam!

You May visit our family counseling page by clicking here.